More than 250 Ukrainian soldiers are being evacuated from Azovstal steel plant in the city of Mariupol after weeks of resistance against the Russian invasion.

Some 53 troops are being taken to hospital in the Russian-controlled town of Novoazovsk, about 30 miles to the east, according to Ukraine’s deputy defence minister Hanna Malyar.

Another 211 people are being taken to Olenivka, about 55 miles north, through humanitarian corridors, she said, adding that they would be exchanged with Russian military prisoners before returning home.

For weeks, the soldiers were the last remaining pocket of resistance against the Russian advance in Mariupol, a strategically-important city on the north coast of the Sea of Azov.

Ms Malyar said: “Thanks to the defenders of Mariupol, Ukraine gained critically important time, and they fulfilled all their tasks. But it is impossible to unblock Azovstal by military means.

“We are working to save people who are still in Azovstal,” she added, without saying how many people remained.

Ukraine’s president Volodymyr Zelenskyy said on Monday night: “Thanks to the actions of the Ukrainian military – the Armed Forces of Ukraine, intelligence, as well as the negotiating team, the International Committee of the Red Cross and the UN, we hope that we will be able to save the lives of our guys.

“There are severely wounded ones among them – they’re receiving care.

“I want to emphasise that Ukraine needs Ukrainian heroes alive. This is our principle. I think that every adequate person will understand these words.”

Other key developments:
• Turkey’s president said he objects to Sweden and Finland joining NATO. Russia’s president Vladimir Putin. meanwhile, appears to step back from earlier objections, saying: “Russia has no problems with these states – none. And so in this sense there is no immediate threat to Russia from an expansion to include these countries”
• Russia’s foreign ministry said attempts by the West and G7 nations to isolate Moscow have worsened global food shortages
• McDonald’s will sell its 850 restaurants in Russia due to the war. The burger giant said it wants a buyer to employ its 62,000 workers and to continue to pay them until the deal closes
• Russia shelled the eastern city of Sievierdonetsk, killing at lest 10 people, according to the governor of the Luhansk region. The Donbas region continues to be the target of attacks
• Ukraine’s president thanked a group of soldiers who reportedly pushed all the way to the border with Russia in the Kharkiv region

Earlier on Monday, Russia had announced an agreement for the injured Ukrainian soldiers to leave the steel plant for treatment in a town held by pro-Moscow separatists.

On Monday night, five buses were seen leaving the steel plant with soldiers inside.

The General Staff of Ukraine’s Armed Forces said on Facebook: “The supreme military command ordered the commanders of the units stationed at Azovstal to save the lives of the personnel.

“Efforts to rescue defenders who remain on the territory of Azovstal continue.” 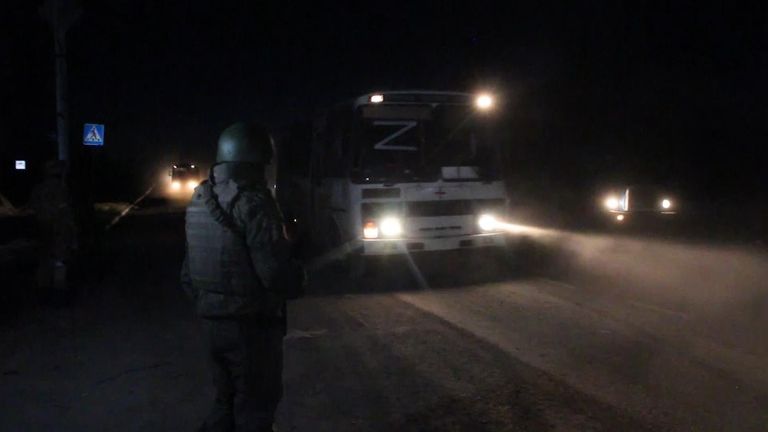 Read more:
The pounding of Azovstal – pictures that tell a thousand words

At one point it was thought there were a few thousand Ukrainian troops in the steel works, along with a few hundred civilians, as Russian soldiers closed in.

The Azov Regiment said that its troops in Mariupol, a strategically-important city in Ukraine’s south, had held out for 82 days, buying time for the rest of Ukraine to fight Russian forces and secure Western weapons.

For much of that time, the soldiers in Mariupol – along with the remaining civilians – faced severe shortages of food, water, electricity, ammunition, and medicine.

Ukraine says that tens of thousands of people have been killed in Mariupol, with much of the city lying in ruins.

Ukraine war: Strikes on port of Odesa are ‘spit in the face’ from Russia following grain deal

Less than 24 hours after Russia and Ukraine signed a deal to reopen Black Sea ports to resume grain exports, a series ...

END_OF_DOCUMENT_TOKEN_TO_BE_REPLACED

A Conservative police and crime commissioner who promised a road safety crackdown has been banned from driving after s...

END_OF_DOCUMENT_TOKEN_TO_BE_REPLACED

After three weeks on the run in an airport, Rowdy the cat is captured

A cat named Rowdy has finally been caught after spending three weeks on the run inside a US airport. The four-year-old...

END_OF_DOCUMENT_TOKEN_TO_BE_REPLACED

Boris Johnson has said he is "determined" to fulfil his Conservative Party's winning 2019 mandate in his final few wee...

END_OF_DOCUMENT_TOKEN_TO_BE_REPLACED

Russian troops are ratcheting up their efforts to secure full control of the entire Donbas area in eastern Ukraine - a...

END_OF_DOCUMENT_TOKEN_TO_BE_REPLACED

Pro-Moscow separatists say they have taken control of Lysychansk, Ukraine's last bastion in the eastern province of Lu...

END_OF_DOCUMENT_TOKEN_TO_BE_REPLACED

Volodymyr Zelenskyy has addressed Glastonbury - describing the festival as the "greatest concentration of freedom".A v...

END_OF_DOCUMENT_TOKEN_TO_BE_REPLACED

Lithuania: How the West is fighting Moscow under the threshold of all-out war

A move by Lithuania to hurt Russia by barring the rail transit of certain goods to a Russian exclave is evidence of ho...

END_OF_DOCUMENT_TOKEN_TO_BE_REPLACED

Hollywood actor Ben Stiller has been pictured in Ukraine a day after he met Ukrainian refugees in Poland who have been...

END_OF_DOCUMENT_TOKEN_TO_BE_REPLACED

The UK will "highly likely" add many hundreds more troops to a NATO force in Estonia tasked with deterring Russia, but...

END_OF_DOCUMENT_TOKEN_TO_BE_REPLACED

A Hampshire wheelie bin has been discovered 1,200 miles away in conflict-torn Ukraine.The Test Valley Borough Council ...

END_OF_DOCUMENT_TOKEN_TO_BE_REPLACED

Ukraine war: ‘There is no family now’ – mother-of-nine’s eldest son fighting on same frontline her husband died on

Maryna Berlizova is sitting on her low bed, a photo of her youngest daughter taped to the wardrobe and a pram in the c...