Ukraine war: Facebook and Instagram posts calling for Vladimir Putin’s death ‘will be allowed’ in some countries

Facebook and Instagram posts calling for Vladimir Putin’s death – and violence against Russian soldiers – are going to be temporarily allowed in some countries, according to Reuters.

Meta, which owns both social networks, has reportedly sent emails to moderators that explain the company is making “allowances for forms of political expression that would normally violate our rules”.

The encouragement of violence against Russian civilians will continue to be prohibited – and posts calling for the president’s death will be deleted if they contain other targets or discuss a location or method.

An email seen by Reuters told moderators: “We are issuing a spirit-of-the-policy allowance to allow T1 violent speech that would otherwise be removed under the Hate Speech policy when: (a) targeting Russian soldiers, EXCEPT prisoners of war, or (b) targeting Russians where it’s clear that the context is the Russian invasion of Ukraine (e.g., content mentions the invasion, self-defence, etc.)”

The message went on to explain that the rules are being changed because “Russian soldiers” is being used as a proxy for the military in relation to this invasion.

Read more: How are big tech companies responding to the invasion of Ukraine? 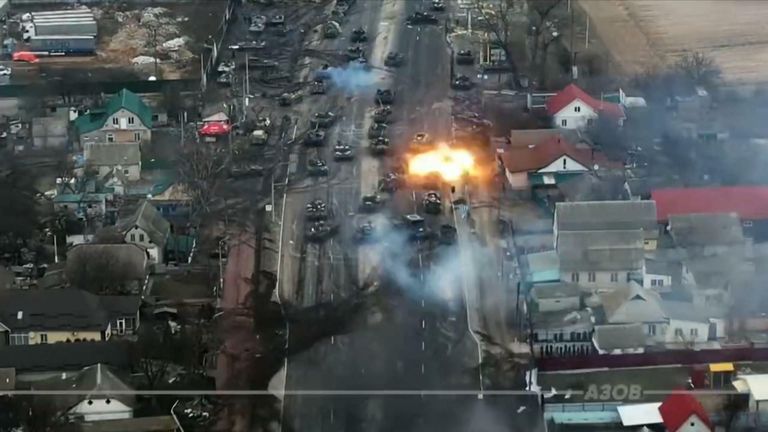 Key developments:
• A US defence official says Russian soldiers are edging closer to Kyiv
• Satellite images suggest a large convoy of Russian troops has dispersed and redeployed
• Boris Johnson has told Sky News it has been “deeply upsetting” to reject calls for a no-fly zone over Ukraine
• The UN Security Council will meet today to discuss Russia’s claims that the US and Ukraine are developing biological weapons – despite firm denials from both countries
• Ukraine has told the UN’s nuclear watchdog that all contact with the Chernobyl power plant has been lost

On Thursday, both sites removed posts from the Russian Embassy in the UK about the bombing of a children’s hospital in Mariupol because they broke rules that prohibit denying violent events.

According to Ukrainian President Volodymyr Zelenskyy, three people – including a child – were killed in Wednesday’s airstrike, which also hit a maternity unit.

One of the posts from the Russian Embassy shared images with a red label that branded them as “fake” – and went on to claim that the maternity unit was non-operational and was being used by Ukrainian soldiers at the time.

Twitter has responded to Russia’s blocks by launching a privacy-protected version of its site – known as an “onion service” – that can be accessed via the dark web. 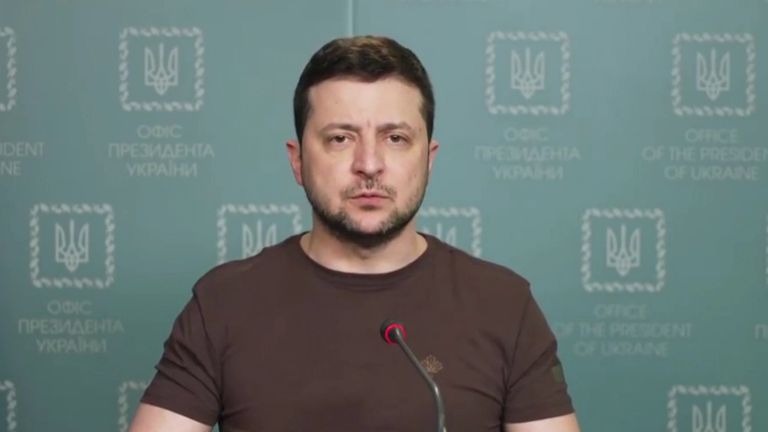 
Zelenskyy: ‘You will be responsible’

What happened on day 15 of the Ukraine invasion
Russia is edging closer to Kyiv, US defence official says
How will this end? Your questions answered
Eyewitness: 300,000 refugees arrive in Warsaw

Facebook owner Meta has reported its first ever revenue drop amid lower advertising sales and growing competition from...

END_OF_DOCUMENT_TOKEN_TO_BE_REPLACED

Ukraine war: Strikes on port of Odesa are ‘spit in the face’ from Russia following grain deal

Less than 24 hours after Russia and Ukraine signed a deal to reopen Black Sea ports to resume grain exports, a series ...

END_OF_DOCUMENT_TOKEN_TO_BE_REPLACED

Teenagers in the UK are getting their news from social media rather than traditional news channels to stay up to date,...

END_OF_DOCUMENT_TOKEN_TO_BE_REPLACED

A jury is deciding whether a teenage gunman who shot dead 17 people at a Florida high school will go to prison for lif...

END_OF_DOCUMENT_TOKEN_TO_BE_REPLACED

An inmate whose escape from jail prompted a nationwide manhunt has been charged with killing the prison guard said to ...

END_OF_DOCUMENT_TOKEN_TO_BE_REPLACED

Russian troops are ratcheting up their efforts to secure full control of the entire Donbas area in eastern Ukraine - a...

END_OF_DOCUMENT_TOKEN_TO_BE_REPLACED

Pro-Moscow separatists say they have taken control of Lysychansk, Ukraine's last bastion in the eastern province of Lu...

END_OF_DOCUMENT_TOKEN_TO_BE_REPLACED

The YouTuber and Minecraft gamer known as Technoblade has died from cancer, aged 23.His father posted an emotional far...

END_OF_DOCUMENT_TOKEN_TO_BE_REPLACED

There were "no missed opportunities" for professionals to prevent the death of a three-year-old boy murdered by his mo...