SHAKIRA and Gerard Pique have reportedly agreed to sell the exclusive Barcelona mansion where they raised their two sons.

The couple, who reached a child custody agreement last week under which the Colombian singer will move to Miami with Milan, nine, and Sasha, seven, are expected to put a price tag of between £10.5million and £12m on the property when it goes on the market.

The house, on an exclusive gated residential estate in Esplugues de Llobregat around a half-hour drive from Barcelona city centre, boasts its own recording studio and gym.

Outside the five-storey property, consisting of two basements and three floors above ground, has a paddle tennis court and mini-football pitch where retired footballer Pique played with his children.

Pique, sent off as a substitute during his final game for Barcelona last week, is living at a penthouse apartment in Barcelona’s trendy Muntaner Street with his new girlfriend Clara Chia, 23.

Shakira remains at the luxury former family home but is expected to leave early in the New Year as long as her father William Mebarak, who has been in hospital, is well enough to make the trip to the States. 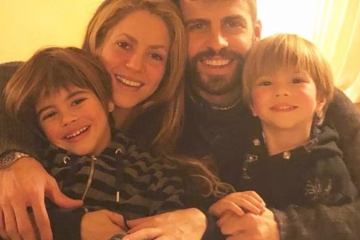 She put pen to paper on the child custody deal with her ex after a marathon 12-hour meeting with their respective lawyers which ended in the early hours of last Tuesday morning.

Later in the day Shakira, 45, and Pique, 35, confirmed in a joint statement: “We wish to communicate that we have signed an agreement that guarantees the welfare of our children and that will be ratified in court as part of a mere formal procedure.

“Our sole objective is to provide them with the upmost security and protection, and we trust that their privacy will be respected.

“We appreciate the interest shown and hope that the children can continue with their lives with the necessary privacy in a safe and calm environment.”

It was signed, “Shakira and Gerard.”

The singer-songwriter is relocating to Florida with the couple’s two sons as part of the deal.

Respected Catalan daily El Periodico, laying bare what it described as the “small print” of the couple’s accord, has claimed Pique will have his children 10 days a month from next year plus holiday time.

It means he will have to divide his time between Spain and the States as he focuses on the extensive business interests he forged before his surprise retirement announcement ahead of his last home game against Almeria earlier this month.

He is expected to start house hunting shortly so he can have a base in Florida.

Shakira, who has relatives and several close friends in Miami owns a £14m mansion in the city she is said to have put up for sale in 2018 before removing it from the market a few months ago.

Pique’s relationship with Barcelona-born beauty Clara emerged shortly after he and Shakira announced in May they had split after 11 years and two children together.

She appeared to file poisoned darts at her ex in a new song she released last month called Monotonia, Monotony in English, with references to the “narcissism” and “cold as Christmas” attitude of a man she is breaking up with.

In the video for the song a mystery man fans have claimed is a representation of Pique shoots a hole in Shakira’s heart as she stocks up with snacks during a late-night trip to the supermarket.

Although initial reports pointed to her leaving for Miami first thing next year, the health of Shakira’s dad has subsequently been identified as the key factor in the as-yet-undefined date of her decision to move with her children.

She faces a tax fraud trial in Barcelona in coming months so will have to return if she emigrates before the case comes to court.

The Chinese owner of Thomas Cook is exploring the sale of a stake in the famous British holiday brand three years afte...

END_OF_DOCUMENT_TOKEN_TO_BE_REPLACED

Coach tickets for Glastonbury sell out in 23 minutes, organisers say

Ticket and coach packages for next year's Glastonbury festival sold out within half an hour of going on sale, organise...

END_OF_DOCUMENT_TOKEN_TO_BE_REPLACED

Senior officials in Tony Blair's government were aware of the technical issues with the Horizon post office computer s...

END_OF_DOCUMENT_TOKEN_TO_BE_REPLACED

The Pocket Gods are hoping to sell one-off album Vegetal Digital for £1m. Here’s why…

At a small independent record store tucked away in a neat courtyard of shops next to St Albans' famous cathedral, a vi...

END_OF_DOCUMENT_TOKEN_TO_BE_REPLACED

The government has decided to push ahead with plans to privatise Channel 4.Ministers have concluded, following a consu...

END_OF_DOCUMENT_TOKEN_TO_BE_REPLACED

Five companies that deliberately targeted the elderly with "predatory" and "coercive" marketing calls in order to sell...

END_OF_DOCUMENT_TOKEN_TO_BE_REPLACED

Donald Trump's social media company says it has agreements in place to raise $1bn from investors ahead of a US stock m...

END_OF_DOCUMENT_TOKEN_TO_BE_REPLACED

Travel companies have seen a sharp surge in bookings as the government announced the current traffic light system of r...

END_OF_DOCUMENT_TOKEN_TO_BE_REPLACED

Liverpool’s deadline day signings in January 2011 could not have had more different careers as one striker ended up...

END_OF_DOCUMENT_TOKEN_TO_BE_REPLACED

COVID-19: MPs call for ‘five a day’-style campaign to get kids exercising an hour a day after lockdowns

A new campaign similar to the "five a day" healthy eating message should encou...