CRISTIANO RONALDO dropped his biggest hint that he wants to stay at Manchester United after mouthing: I’m not finished.

The Portugal superstar scored his 24th goal of the season – and 18th in the Premier League – from the penalty spot in the convincing home win over Brentford.

Then Ronaldo appeared to mouth ‘I’m not finished’ into a television camera during a post-match lap of honour with his team-mates after sixth-placed United’s final home game of the season at Old Trafford.

Ronaldo has another season left on his two-year Old Trafford contract but there are still question marks over whether the 37-year-old will be in new boss Erik Ten Hag’s plans when he arrives from Ajax this summer.

The striker also got the full backing from interim boss Ralf Rangnick to carry on despite his belief that Ten Hag will need to bring in two new front men next season.

Rangnick said: “The way we played again tonight, why should he not be part of the squad and help the team? 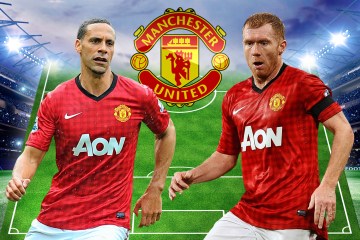 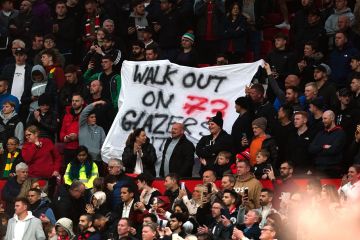 “But this is a question you have to ask Erik and also Cristiano. So far we haven’t been able to speak. Erik’s focus is on winning the Dutch league, our focus was on our games.

“What I believe is that the club should bring in two strikers – real strikers.

“And Cristiano is not a central striker and he does not want to play in that position.

“This club needs two strikers although most important is not the position but the quality of who is brought in.”

Rangnick has insisted that in his forthcoming dual role as a United consultant alongside his new job as Austria manager he will concentrate in recruitment with Ten Hag.

While the likes of Nemanja Matic and Juan Mata waved goodbye to the Old Trafford faithful for the final time.

The German added: “It’s obvious quite a few players will leave and there is a need for top quality players.

“I strongly believe that if everyone works together, we can bring Man Utd back to where we need to be.

“Other clubs only needed two or three transfer windows but then again we have to make sure from now on we bring in only top quality players who help raise the level.

“If this happens this summer, in the winter and then next summer, I don’t think it should take too long to make progress.”

The lack of progress under Rangnick during his six–month reign has left him frustrated with United lying sixth and out of the running for the top four.

He said: “I’m not happy with the results, especially in the last four or five weeks. We lacked consistency when we thought that we could make the Champions League for next season.

“So we played well against Brentford and for instance we had 91 per cent passing accuracy.

“I am not completely happy with these six months – I would have expected to qualify for the Champions League, that was the goal we had.”

United fans had planned to protest by walking out with 17 minutes to go, to mark the 17 years the Glazers have been in charge. A few left but the mass exodus did not materialise.

Brentford boss Thomas Frank was frustrated with his side and said: “We were not brave enough or aggressive enough in possession.

“We thought we had a chance to do something against them but this was the best I have seen them play this season.”

A man has been interviewed by police over allegations that a van drove over and killed three ducklings.Staffordshire P...

END_OF_DOCUMENT_TOKEN_TO_BE_REPLACED

Morning, United fans Jonathan David, Kalidou Koulibaly and Orel Mangala are under the transfer spotlight as United stars prepare for...

END_OF_DOCUMENT_TOKEN_TO_BE_REPLACED

Sweden and Finland could join NATO in next ‘couple of months’, US ambassador to alliance tells Sky News

The US ambassador to NATO has said the military alliance is trying to expedite the process to ensure that Sweden and F...

END_OF_DOCUMENT_TOKEN_TO_BE_REPLACED

There were some disgraceful scenes following Sheffield United’s defeat to Nottingham Forest in their Championship p...

END_OF_DOCUMENT_TOKEN_TO_BE_REPLACED

Benzema draws level with Raul as second-top scorer behind Ronaldo

KARIM BENZEMA moved level with Raul as Real Madrid's second top goal scorer in history after scoring in the 6-0 win against Levante....

END_OF_DOCUMENT_TOKEN_TO_BE_REPLACED

Keep up to date with the latest news, gossip and opinion from the world of football. Liverpool kept their quadr...

END_OF_DOCUMENT_TOKEN_TO_BE_REPLACED

Supermarkets, cars and lifts are just some of the unusual birth places reported for babies who have made speedy entran...

END_OF_DOCUMENT_TOKEN_TO_BE_REPLACED

MANCHESTER UNITED striker Edinson Cavani revealed he wouldn't have agreed a contract extension with the club had he known they would...

END_OF_DOCUMENT_TOKEN_TO_BE_REPLACED

Manchester City take on Real Madrid in Spain tonight in the second leg of their Champions League semi-final showdo...