Former health secretary Matt Hancock has had the whip suspended after a source close to him said he will be going on I’m a Celebrity… Get Me Out of Here!.

Mr Hancock will be jetting off to the jungle in Australia, reportedly as a latecomer to the reality TV show.

Chief Whip Simon Hart MP said: “Following a conversation with Matt Hancock, I have considered the situation and believe this is a matter serious enough to warrant suspension of the whip with immediate effect.”

Mr Hancock was health secretary during the COVID pandemic, but stepped down after breaching lockdown rules by conducting an affair in his ministerial office with aide Gina Coladangelo.

The source said: “I’m A Celeb is the most watched show on TV.

“Matt doesn’t expect to serve in government again, so it’s an incredible opportunity for him to engage with the 12m Brits who tune in every single night.

“Matt has told the whips in parliament and he will use his time in the jungle to promote his dyslexia campaign.”

The news has raised eyebrows in Westminster, but the source insisted “there are many ways to do the job of being an MP”.

“Whether he’s in camp for one-day or three weeks, there are very few places people will be able to see a politician as they really are,” they said.

“Where better to show the human side of those who make these decisions than with the most-watched programme on TV?”.

‘I’m looking forward to him eating a kangaroo’s penis’

I’m a Celebrity… Get Me out of Here! starts on ITV on 6 November.

Members of Mr Hancock’s local Tory Party are less than pleased about his decision to fly to Australia to appear on the show.

SNP MP Pete Wishart said: “It speaks volumes that Matt Hancock would rather be stranded in a remote jungle eating kangaroo testicles than spend a moment longer on the Tory benches at Westminster, as Rishi Sunak’s government lurches from one crisis to another.”

Shadow health minister Andrew Gwynne also took a pop at Mr Hancock, saying: “To be fair to Matt Hancock, I’d sooner eat wallaby anus than be a Tory MP too.”

Dave Penman, general secretary of the FDA union which represents senior civil servants, said: “Oh to have a job where you can decide for yourself you’re taking a month off, abandon your work and responsibilities, get paid shedloads and face little consequence.

“I’m sure he’ll be an inspiration to other public servants.”

However, Andrew Smith, a Conservative councillor on West Suffolk Council, said he could see why Mr Hancock might want to appear on the show “given what’s happened to him and his personal life and his career”.

He added: “It’s not a show I would watch or indeed I would personally do – I don’t like eating things that I don’t know where they’ve come from, if you get my drift.”

Hancock initially turned down gig due to ‘instability’ in government

Mr Hancock was among supporters of Rishi Sunak who welcomed the new leader to Conservative headquarters last week, but was overlooked for a ministerial job under the new prime minister.

He had also reportedly been considering a run to be chair of the Treasury Select Committee, but pulled out of the race on Monday.

The source close to Mr Hancock claimed he initially turned down the opportunity to appear on the reality TV show – despite being “flattered and curious”, because of the “instability” the government was facing at the time.

However, he now believes the administration is “stable” under Mr Sunak and views his stint on the show as an opportunity to talk about issues he cares about.

Response to Hancock: “The Prime Minister believes that at a challenging time for the country MPs should be working hard for their constituents, whether that’s in the house or indeed in their constituencies”

Following the news, a Downing Street spokesperson said: “The prime minister believes that at a challenging time for the country, MPs should be working hard for their constituents, whether that’s in the house or indeed in their constituencies.”

When asked whether the former health secretary consulted Mr Sunak about the decision, a spokesperson said: “Not that I’m aware of.” 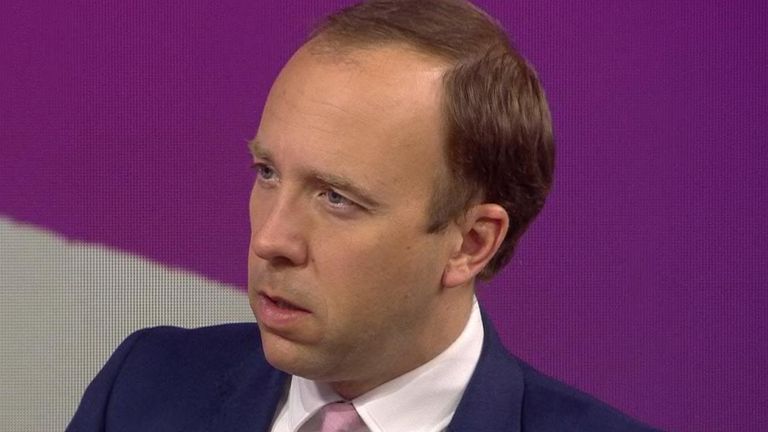 Mr Hancock will not be the first politician to enter the jungle.

Nadine Dorries took part in I’m A Celebrity in 2012, the first sitting MP to appear on the show, but was suspended by the Conservative Party for her appearance.

She later apologised to the House of Commons over the fee she was paid for appearing in the popular programme, which saw her become the first contestant voted out of the jungle by the public.

Responding to Mr Hancock’s news she joked that at least “he doesn’t have to worry about George Osborne in No10 waiting to remove his whip when he gets back”.

Matt Hancock broke government rules over I’m A Celebrity… Get Me Out Of Here! stint, watchdog says

END_OF_DOCUMENT_TOKEN_TO_BE_REPLACED

Matt Hancock has been told by an I'm a Celebrity campmate that "sorry... doesn't really cut it" over his rule-breaking...

END_OF_DOCUMENT_TOKEN_TO_BE_REPLACED

I’m A Celebrity: Matt Hancock admits ‘no excuse’ for his actions after being confronted by campmate Scarlette Douglas

Matt Hancock has admitted there was "no excuse" for the actions that led to his resignation as health secretary after ...

END_OF_DOCUMENT_TOKEN_TO_BE_REPLACED

Radja Nainggolan has been suspended indefinitely by his club Royal Antwerp after being caught smoking in the dugout before...

END_OF_DOCUMENT_TOKEN_TO_BE_REPLACED

The school district at the centre of the mass shooting at a primary school in Uvalde, Texas, has suspended its entire ...

END_OF_DOCUMENT_TOKEN_TO_BE_REPLACED

ERLING HAALAND snubbed any move to Manchester United because they never featured on his own table of clubs to join. Haaland complete...

END_OF_DOCUMENT_TOKEN_TO_BE_REPLACED

There has been an outpouring of emotion across the globe as the world has said goodbye to Queen Elizabeth.But as well ...

END_OF_DOCUMENT_TOKEN_TO_BE_REPLACED

The King will be joined by both his sons as he walks behind the Queen's coffin from Buckingham Palace.The King, the Pr...