The diversity of a Lula crowd is really quite exceptional; it’s a melting pot of Brazilian society.

Lula’s rallies and gatherings are usually part political, but mainly party, and this extraordinary day was no exception, although at times it looked like it was going to be short-lived as this election went down to the wire.

The early vote returns tend to favour right-wing candidates like the incumbent Jair Bolsonaro, and he soared ahead as the results began to come in.

For the leftist supporters of Lula da Silva, it was a case of keeping the faith and believing.

This second round was no different.

For the tens of thousands of Lula supporters who had gathered on Sao Paulo’s Paulista Avenue, they knew a win for their candidate would change the political direction of Brazil.

The tension was palpable.

People were glued to their phones, refreshing the official electoral results website every few seconds – the results were like a drip-feed of hope.

Behind at first, Lula’s votes started to grow, and every gain was greeted with rapture from the crowd. 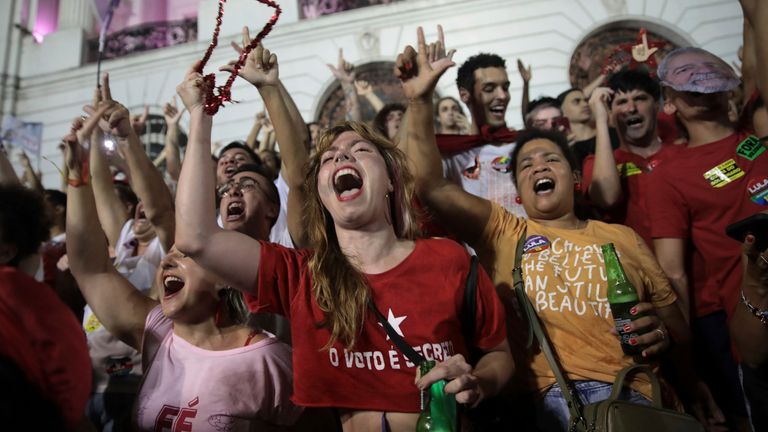 It was neck and neck until the end, and then it was done, Lula da Silva was declared the winner.

People in the crowd were crying and hugging each other, as fireworks exploded above their heads. Within minutes, more people began flooding the streets, heading for the celebration.

It was a complete explosion of relief and happiness. The party was now fully under way.

One young woman in the crowd was in tears. She explained to me that it was a big moment for her and her family to see Lula become president again.

“My family was very poor, very poor, and today I’m living in Sao Paulo and working the job I love.”

Throughout the day, large numbers of riot police and mounted police officers had gathered in parks around the main avenue.

There has always been a fear with such a close election result – and everyone had predicted it – that if the two opposing supporters came together it could get violent.

But as far as we could tell, none of President Bolsonaro’s supporters had turned out here, or were visible in the crowd.

News spread that Lula was going to appear.

A member of his inner circle gave us regular updates, saying that he was meeting his campaign and legal teams and taking calls from world leaders, including US President Joe Biden.

It was important to Lula and his team that his win was fully endorsed by other nations, to hopefully counteract a fear that President Bolsonaro simply will not accept the result.

It was impossible to guess how many supporters were in this crowd waiting for him. A sea of red filled this part of the city centre as far as the eye could see.

He finally appeared on a mobile stage and kissed his wife Rosangela da Silva. His appearance was met with a deafening roar.

This was a night to celebrate for Lula da Silva and his people, and celebrate they did, as enormous fireworks lit up the night sky of Sao Paulo.

It’s difficult to describe just how divided Brazil is, the election result certainly tells a story about deep divisions in this country.

And for supporters of both President Bolsonaro and Lula da Silva, there is no common ground.

“If they voted for Bolsonaro, they are fascists, they are homophobic, they are racist, it’s not possible to come back together,” one of Lula’s supporters told me.

“So, we have to move to another Brazil, a new time.”

Both sides utterly believe that they are the guardians of Brazil’s future and many actually detest each other.

Lula has promised to reunite his country – it’s going to be hard, not least because almost half of them didn’t vote for him.

Brazil are through to the last 16 of the World Cup thanks to a 1-0 win over Switzerland.It was a hard-fought victory ...

END_OF_DOCUMENT_TOKEN_TO_BE_REPLACED

The 2022 World Cup will burst into life on Sunday ahead of a feast of football this winter.A total of 32 teams will play 64...

END_OF_DOCUMENT_TOKEN_TO_BE_REPLACED

Welcome to the 2022 Ballon d’Or   We are glad to welcome back the ceremonies after the 2021 trophy awards were cancelled, much to th...

END_OF_DOCUMENT_TOKEN_TO_BE_REPLACED

Brazilian police searching for a British journalist and an indigenous expert who vanished in a remote part of the Amaz...

END_OF_DOCUMENT_TOKEN_TO_BE_REPLACED

A British journalist has disappeared in one of the remotest corners of the Amazon just days after his guide received t...

END_OF_DOCUMENT_TOKEN_TO_BE_REPLACED

Supermarkets, cars and lifts are just some of the unusual birth places reported for babies who have made speedy entran...

END_OF_DOCUMENT_TOKEN_TO_BE_REPLACED

Travis Scott: Rapper set to headline first festival since Astroworld tragedy – with Brazil event a day after anniversary of Houston crush which killed 10

Travis Scott is reportedly to headline his first festival since the Astroworld crush which killed 10 people - with the...

END_OF_DOCUMENT_TOKEN_TO_BE_REPLACED

There’s one thing Ally McCoist and Alan Brazil can agree on ahead of Rangers vs Celtic on Sunday.And Brazil, th...

END_OF_DOCUMENT_TOKEN_TO_BE_REPLACED

England at World Cup but Brazil are flying, Argentina have Messi and never write off Germany

The World Cup is edging closer and anticipation will be ramping up ahead of Friday’s draw to learn how the group st...