The leader of Islamic State has blown himself up in what President Joe Biden said was an “act of cowardice” during a raid by US special forces in Syria.

Abu Ibrahim al-Hashimi al-Qurayshi detonated a bomb that killed him and family members – including his wife and two children – as American forces approached a house in the village of Atmeh, in the rebel-held province of Idlib.

He was among at least 13 people, including four women, who died during the operation, which lasted two hours.

A lieutenant described as a “deputy” and his wife, along with a child, were gunned down after the couple opened fire on US troops, Pentagon press secretary John Kirby said during a defence briefing.

At least six children were also among the dead, with one girl badly injured as the violence unfolded, children’s charity UNICEF said in a statement.

Mr Kirby said the mission was “successful”, adding there were no US military casualties.

Ten people, including a man, woman and eight children, were safely evacuated during the operation – which was “months in the making”.

“This is a man that we should all be happy is no longer walking on the face of the earth,” Mr Kirby said.

Al-Qurayshi, who took control of IS in 2019, was identified by his fingerprints and DNA analysis.

Mr Kirby said he could not confirm whether a $10m bounty on the IS leader’s head can or will be claimed.

Biden: Al-Qurayshi was a ‘major threat to the world’

Mr Biden announced the killing in a statement, saying: “Thanks to the skill and bravery of our armed forces, we have taken off the battlefield Abu Ibrahim al-Hashimi al-Qurayshi.”

He said troops “successfully undertook a counterterrorism operation to protect the American people and our allies, and make the world a safer place”.

In a White House address on Thursday, the president said he was determined to protect US citizens from terrorist threats and vowed to take “decisive action” to protect the country.

Mr Biden told the nation: “Last night, operating on my orders, the United States military forces successfully removed a major terrorist threat to the world, the global leader of ISIS.”

As leader of IS, Al-Qurayshi “oversaw the spread” of affiliated terrorist groups around the world after “savaging communities and murdering innocents”, Mr Biden said.

Mr Biden branded him a “coward” for blowing himself up. 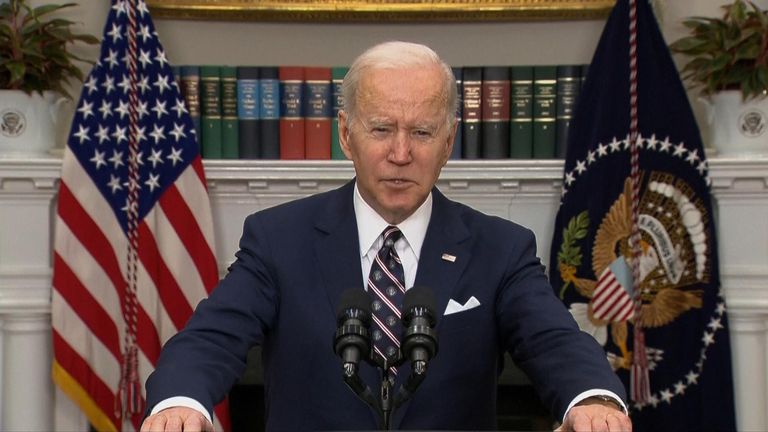 What about the other casualties?

A US administration official blamed the civilian casualties on the explosive used by militants.

Mr Biden said the US department of defence took “every precaution possible to minimise civilian casualties”.

He said the decision to pursue a special forces raid rather than an airstrike was taken with this in mind, “at a much greater risk to our own people”.

US troops also used loudspeakers to warn women and children to leave the area.

But residents still told of how the relentless gunfire and explosions jolted Atmeh, which is located in northwest Syria – close to the border with Turkey.

It’s home to many camps for people displaced by Syria’s civil war and populated areas were “severely damaged”, according to UNICEF.

The raid had begun at midnight, and one of the helicopters used had to be blown up on the ground after suffering a mechanical problem, US officials said.

The top floor of the house was also destroyed during the clash and body parts were seen scattered near the site.

How significant is the IS presence in the area?

IS has been attempting a resurgence in the region, launching a series of attacks which included an assault on a prison last month.

Since the year began, violence has heavily escalated in and around Idlib in Syria’s northwest, which is home to 1.2 million children in need of assistance, according to UNICEF.

Mr Biden said the operation “sent a strong message to terrorists”, warning: “We will come after you and find you.”

END_OF_DOCUMENT_TOKEN_TO_BE_REPLACED

The son of late Philippine dictator Ferdinand Marcos has triumphed in the country's presidential election.It is the fi...

END_OF_DOCUMENT_TOKEN_TO_BE_REPLACED

A woman had to be rescued by firefighters after falling into a toilet while trying to find her mobile phone that had a...

END_OF_DOCUMENT_TOKEN_TO_BE_REPLACED

More than a month after the UK's Ukraine Sponsorship Scheme was launched, thousands of sponsors are still waiting to w...

END_OF_DOCUMENT_TOKEN_TO_BE_REPLACED

US actor and stand-up comedian Gilbert Gottfried has died at the age of 67 after a long illness, his family has said.H...

END_OF_DOCUMENT_TOKEN_TO_BE_REPLACED

Jordan Mooney has died at the age of 66 from a short battle with cancer, her family has announced. Mooney - real name ...

END_OF_DOCUMENT_TOKEN_TO_BE_REPLACED

Idaho has become the first US state to enact a law modelled on a Texas statute banning abortions after about six weeks...

END_OF_DOCUMENT_TOKEN_TO_BE_REPLACED

City of Miami Beach officials have declared a state of emergency as they struggle to stop spring break chaos.As part o...

END_OF_DOCUMENT_TOKEN_TO_BE_REPLACED

A toddler has died after being attacked by a dog at her own home, Merseyside Police have said.Officers received a repo...

END_OF_DOCUMENT_TOKEN_TO_BE_REPLACED

Nazanin Zaghari-Ratcliffe and Anoosheh Ashoori have arrived in the UK, touching down at RAF Brize Norton shortly after...