COVID: Next variant ‘could be more severe’ with future winters ‘tricky’, govt advisers say – as all restrictions in England to be scrapped

The next coronavirus variants “could be more severe” than Omicron and future winters will be “tricky”, the government’s top medical advisers have warned.

Meanwhile, England’s chief scientific adviser Sir Patrick Vallance added that “the virus will continue to evolve and it will probably will be quite fast for the next five years”.

Live COVID updates as fourth jab to be offered to over 75s, care home residents and the vulnerable

“One thing this virus has taught us is not to be cocky,” he added.

“Quoting an American colleague, you can celebrate when the sun is shining, but always take the umbrella with you.”

Timeline of end of COVID restrictions

• COVID provisions attached to statutory sick pay will be removed

The comments came hours after Boris Johnson unveiled his “living with COVID” plan, announcing that the legal requirement for people who test positive for coronavirus to self-isolate will be removed from Thursday.

In an attempt to ensure people do not build up personal stockpiles of free lateral flow tests before the 1 April cut-off, individuals can now only order a box every three days, instead of every 24 hours.

Read more: What will living with COVID mean?

The changes will be subject to approval by Parliament.

Speaking at the Downing Street news briefing, Prof Whitty warned the country still has “high rates of Omicron” – with between one in 20 and one in 25 people believed to be infected at present – and that coronavirus remains “a very prominent infection”.

“As we look at the next weeks, we still have high rates of Omicron. I would urge people in terms of public health advice to still self isolate,” he added.

Prof Whitty: Protecting the most vulnerable is ‘critical’

Prof Whitty also said that good surveillance, capacity to rapidly step up and protecting the most vulnerable are “the critical things that we need to maintain even beyond this next few weeks into the rest of this year and the rest of the way that we continue to manage this epidemic”.

He added that maximising ventilation, hand washing and using face masks in enclosed spaces with large numbers of people when there are significant numbers of cases remain important. 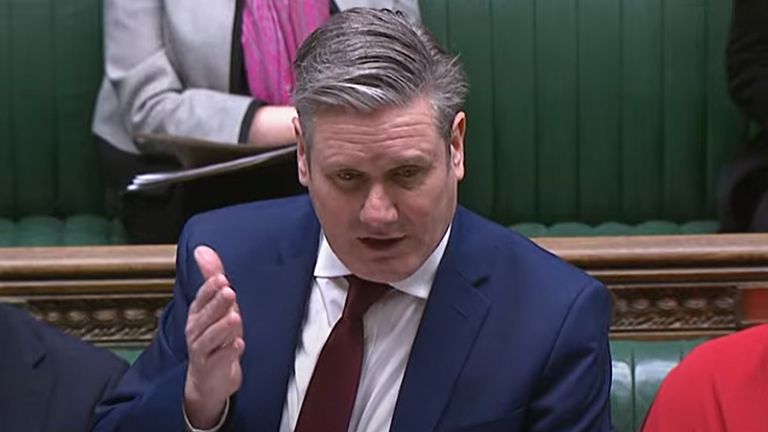 
Sir Keir Starmer has said that the PM has given ‘more chaos and disarray’ with his new COVID plan.

Concern regarding removal of free testing

Opposition MPs earlier expressed concern that scientific evidence behind the government’s decision to scrap universal free testing in the spring had not been published.

“These are decisions which will hit the lowest paid and the most insecure workers the hardest,” he said.

Liberal Democrat leader Sir Ed Davey added: “Is the prime minister really telling people they must chose between money for the weekly shop or a test so they don’t accidentally take this contagious virus into their loved ones’ homes?”

Responding to the criticism earlier, Mr Johnson said the evidence for ending COVID restrictions in England is “amply there in the scientific evidence”.

At the news briefing later, the PM added: “This change in the testing regime won’t come through for a few weeks to come, by which time we hope and expect the incidence will have further declined. I hope that the impact on people will be minimal.”

A cabinet meeting to sign off the PM’s strategy finally took place earlier today after being pushed back due to a row over free testing.

Number 10 confirmed earlier that the gathering had been pushed back, with ministers having convened later on Monday afternoon to agree the plan.

Announcing that from today, ministers are removing the guidance for staff and students in most education and childcare settings to undertake twice weekly asymptomatic testing, the PM said free tests will remain available for “the oldest age groups and the most vulnerable to COVID”.

The PM suggested the government will set out who will continue to be entitled to free testing in March.

The Department of Health and Social Care will receive no extra money to deliver the testing.

Monkeypox: Four more cases of rare viral infection have been confirmed in England

Four more cases of monkeypox have been detected in England, health officials have said.The new cases of the rare viral...

END_OF_DOCUMENT_TOKEN_TO_BE_REPLACED

If there is one message from the Bank of England's forecasts today, it is this: if things feel tough today, then just ...

END_OF_DOCUMENT_TOKEN_TO_BE_REPLACED

The coronavirus pandemic is far from over, Bill Gates has warned, saying there could still be a variant which is "even...

END_OF_DOCUMENT_TOKEN_TO_BE_REPLACED

Authorities in Shanghai have fenced off some apartment buildings as the Chinese city continues to endure a strict lock...

END_OF_DOCUMENT_TOKEN_TO_BE_REPLACED

NHS England will be banned from using products and services linked to slavery or human trafficking under a law making ...

END_OF_DOCUMENT_TOKEN_TO_BE_REPLACED

COVID: Despite the end of free testing, the virus is stronger than ever

You'd be forgiven for thinking the COVID pandemic was on its way out. But today's data show that, from the virus' pers...

END_OF_DOCUMENT_TOKEN_TO_BE_REPLACED

The first day of April is expected to bring a last gasp from winter, with weather warnings for snow and ice in parts o...

END_OF_DOCUMENT_TOKEN_TO_BE_REPLACED

England at World Cup but Brazil are flying, Argentina have Messi and never write off Germany

The World Cup is edging closer and anticipation will be ramping up ahead of Friday’s draw to learn how the group st...

END_OF_DOCUMENT_TOKEN_TO_BE_REPLACED

Type 1 diabetes: All patients in England to be offered ‘transformational’ wearable tech

All patients with Type 1 diabetes in England are to be offered wearable technology to monitor their blood sugar levels...

END_OF_DOCUMENT_TOKEN_TO_BE_REPLACED

England are winning 2-1 against Switzerland in their first friendly of 2022. Breel Embolo got on the end of a f...